Insights into the Mechanics of Adaptation to Spindle Assembly Checkpoint

Making two cells from one is a complex affair. This fundamental process of 'life in miniature' (cell division) requires a myriad of cellular processes and events that need to be coordinated and executed in a precise order. Such an overarching coordination is enforced by a class of cellular surveillance systems known as the checkpoint controls (or simply checkpoints). Checkpoints ensure that a later event is not initiated until a prior event is properly executed and completed. In the event of a malfunction, the checkpoint will impose a cell cycle arrest, preventing all subsequent events, thus allowing cells more time to complete the preceding event. There is a number of checkpoint controls operating during the cell division cycle, ensuring cells’ smooth passage through various transitions. For example, DNA damage checkpoint is activated when cells incur chromosome damage; it arrests cells in G2 phase and subsequently ‘allows’ them to enter mitosis once the damage is repaired. Thus checkpoints play a critical role in the maintenance of genome integrity.

Adaptation to the spindle checkpoint is regulated by the interplay between Cdc28/Clbs and PP2ACdc55.
The spindle checkpoint arrests cells in metaphase until all chromosomes are properly attached to the chromosome segregation machinery. Thereafter, the anaphase promoting complex (APC/C) is activated and chromosome segregation can take place. Cells remain arrested in mitosis for hours in response to checkpoint activation, but not indefinitely. Eventually, they adapt to the checkpoint and proceed along the cell cycle. In yeast, adaptation requires the phosphorylation of APC/C. Here, we show that the protein phosphatase PP2A(Cdc55) dephosphorylates APC/C, thereby counteracting the activity of the mitotic kinase Cdc28. We also observe that the key regulator of Cdc28, the mitotic cyclin Clb2, increases before cells adapt and is then abruptly degraded at adaptation. Adaptation is highly asynchronous and takes place over a range of several hours. Our data suggest the presence of a double negative loop between PP2A(Cdc55) and APC/C(Cdc20) (i.e., a positive feedback loop) that controls APC/C(Cdc20) activity. The circuit could guarantee sustained APC/C(Cdc20) activity after Clb2 starts to be degraded.
[PMID: 23999167]

Like other checkpoint controls, Spindle Assembly Checkpoint (or SAC) is conserved from yeast to man and functions during mitosis (or M phase). It monitors the transition from metaphase to anaphase during which duplicated chromosomes are equally partitioned in to the two daughter cells. During normal division, a number of things have to be in place before anaphase can be initiated: the master regulator kinase Cdk1 (a complex of catalytic subunit Cdk1 and the regulatory subunit cyclin) should be activated, all duplicated chromosomes have to be aligned at the metaphase plate (approximately the mid-region of the dividing cell) and the chromosomes have to be properly attached to the mitotic spindle via their kinetochores. Once these conditions are met, the cohesion between the duplicated chromosomes (due to a protein complex known as cohesins) is dissolved, an event mediated by a E3 ubiquitin ligase APCCdc20 (Cdc20-activated Anaphase Promoting Complex), followed by progressive segregation of one set of chromosomes into each daughter cell by the mitotic spindle. There is a functional link between APCCdc20 and Cdk1 in that Cdk1 activates APCCdc20 by phosphorylation in mitosis.

Central to this intricate orchestration is the attachment of duplicated chromosomes to the mitotic spindle via their kinetochores. This is the event that is monitored critically by the SAC such that a single unattached kinetochore can activate the SAC resulting in the inhibition of APCCDC20 and consequently, of chromosome segregation. SAC signalling that mediates inactivation of APCCDC20 and imposes a cell cycle arrest involves highly conserved Mad1, Mad2, Mad3, MPS1, Bub1, Bub3 and Ipl1 proteins (yeast nomenclature). During this transient arrest if all kinetochores are eventually captured by the spindle, SAC is turned off, APCCCdc20 is activated again and cells proceed to anaphase. The presence of a single unattached kinetochore, however, keeps the SAC in the activated state and cell cycle arrest remains in place for an extended duration.

However, there is a twist in this neat scheme. The SAC cannot impose cell cycle arrest indefinitely. After a prolonged period of arrest, cells adapt to the activated state of SAC (i.e. become desensitized) and resume cell cycle progression despite the presence of unoccupied kinetochores. The mechanism governing this cellular response, which is clearly detrimental to the chromosome stability, is not clear. The important paper (JCB, 202:765-778) from Andrea Ciliberto's laboratory provides an insight into the mechanism underpinning this atypical cellular behaviour. This study fittingly uses yeast Saccharomyces cerevisiae as a model system to investigate the phenomenon of adaptation, since concepts of checkpoints and "adaptation" were both first defined in yeast. Using non-phosphorylatable mutants of APC subunits Cdc16 and Cdc27, and mutants lacking its activator Cdc20, Andrea and colleagues first established that adaptation to SAC requires both Cdc20 and APC phosphorylation. In these experiments Adaptation was measured in terms of a decline in the levels of the mitotic cyclin Clb2 and chromosome-segregation inhibitor Pds1, and elongation of the mitotic spindle. Intriguingly, even though Clb2 levels decline during adaptation meaning that Cdk1 activity also declines, it was found that Cdk1 activity is in fact required for adaptation. Single cell analysis of cells undergoing adaptation revealed that before adaption, Clb2 concentration increases but it rapidly declines once adaptation "sets-in". There are, then, two key issues: (i) Cdk1 activity is required for adaptation and yet it declines rapidly during adaptation, and (ii) why does it take a long period before a cell initiate adaptation.

The authors reasoned that if phosphorylation of APC subunits by Cdk1 is required for adaptation then there should be a phosphatase that opposes this phosphorylation to maintain the checkpoint. Since PP2ACdc55 has been reported to be required for the maintenance of the SAC, it could be the phosphatase that opposes the "adaptive-action" of Cdk1. The following key observations were consistent with this notion: (i) APC subunit Cdc16 underwent enhanced phosphorylation in the absence of PP2Cdc55 (ii) in contrast to cdc55Δ deletion cells cdc16-6A cdc27-5A cdc55Δ triple mutant was arrested by the checkpoint and was severely defective in its ability to adapt. These data point to a scheme where Cdk1/Clb2 phosphorylates and PP2ACdc55 dephopshorylates Cdc16. These opposing activities are what possibly determine whether a cell arrests or adapts. Since it takes some time before phosphorylation overtakes dephopshorylation by PP2ACdc55, it explains why it requires a long period for cells to adapt to the SAC-induced arrest. Based on these central observations, Andrea and colleagues propose a dynamic model for metaphase to anaphase transition in the context of checkpoint-efficacy. According to this model, checkpoint arrest by SAC is imposed, aided by continuous dephosphorylation of APC (inactive) by PP2ACdc55. However, Clb2 continue to accumulate in the nucleus during the arrest and increasing Cdk1/Clb2 continues to phosphorylate the APC, progressively opposing the action of PP2ACdc55. At some point, the balance is tipped in the favour of net phosphorylation of APCCdc20, the process of adaptation takes hold and the levels of both Clb2 and Pds1 rapidly decline. Thus, "arrest/adaptation" is proposed as a two state system in which the shifting balance between the inter-linked positive and negative control loops ultimately determines the system’s state in a given time frame. From a teleological perspective then, the spindle assembly checkpoint control has a built-in "escape-route" from a potentially unproductive prolonged arrest, allowing cells to continue with the next division cycle (even though at the cost of some degree of genetic instability) than to permanently remain arrested in metaphase and lose viability. Hence, this study by Andrea and colleagues not only provides important insights into the mechanism underlying adaptation to the spindle assembly checkpoint but is also a demonstration of how interlocking control loops determine the dynamic behaviour of cells during progression through the cell division cycle. 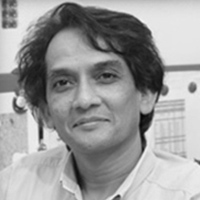 Download PDF of this article
Quantitative Biology
of Cell Division 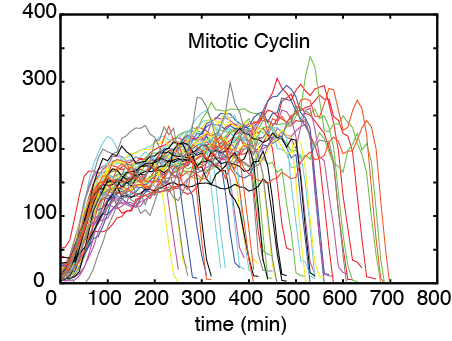