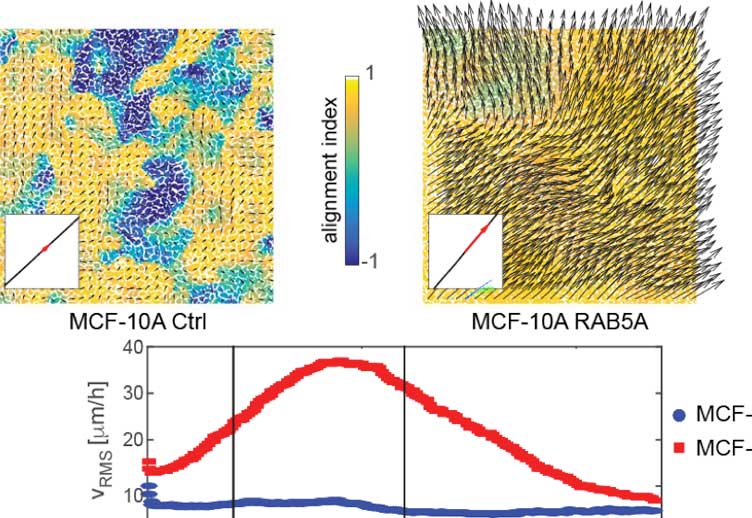 Be still like a mountain and flow like a river: The role of endocytosis in the control of collective epithelial movements

Endocytic reawakening of motility in jammed epithelia.
Dynamics of epithelial monolayers has recently been interpreted in terms of a jamming or rigidity transition. How cells control such phase transitions is, however, unknown. Here we show that RAB5A, a key endocytic protein, is sufficient to induce large-scale, coordinated motility over tens of cells, and ballistic motion in otherwise kinetically arrested monolayers. This is linked to increased traction forces and to the extension of cell protrusions, which align with local velocity. Molecularly, impairing endocytosis, macropinocytosis or increasing fluid efflux abrogates RAB5A-induced collective motility. A simple model based on mechanical junctional tension and an active cell reorientation mechanism for the velocity of self-propelled cells identifies regimes of monolayer dynamics that explain endocytic reawakening of locomotion in terms of a combination of large-scale directed migration and local unjamming. These changes in multicellular dynamics enable collectives to migrate under physical constraints and may be exploited by tumours for interstitial dissemination.
[PMID 28135264]

For several years biologists have studied the migration of mammalian cells as individual entities placed at the centre of a microscope spotlight. These fundamental investigations led to the establishment of a universally-accepted model for mesenchymal migration valid for all cells adhering to a substrate. Cells advance through repeated cycles of polarized membrane protrusion, new focal adhesion assembly, actomyosin contraction, translocation of the nucleus, and old adhesion disassembly1. This model provided a platform to reveal the signalling pathways involved in the regulation of motility and a reference to detect alternative migration schemes such as those appearing in cancer or immune cells. Yet, as much as they tend to be refractory to any stereotyped model, mammalian cells rarely find themselves isolated in the body. In particular, epithelial cells provide a beautiful example of a functional community, that is an ensemble working for a common purpose.

Single epithelial cells behave and migrate according to the mesenchymal scheme. However, as soon as they attain a sufficient density, their dynamics starts to change, migration velocity decreases and coherent, multicellular movements appear. Cells now reach confluency, which literally means 'flowing together', a prerequisite for the generation of differentiated, functional epithelia. The phase transition from a gas-like moving group of individual cells to a liquid-like flowing collective is enabled by the establishment of connections between cells, the cell-to-cell junctions, which form supra-cellular mechanical structures. As cell density further increases, collective movements become restricted by the crowding and the monolayer experiences a further transition to a solid-like, jammed phase identifying a quiescent monolayer. This final transition is however reversible, as in various cases epithelial monolayers reactivate collective motility, in order to heal a wound, to execute development, or to descend the path of neoplastic transformation2. This entire complexity goes far beyond what we have learnt for single cell motility. To study this exciting phenomena a new access is needed.

The work led by Prof. Scita, to which I had the pleasure to collaborate, introduces a novel approach which exploits synergies from the fields of biology, engineering, and physics, to provide a multiscale comprehension of epithelial un-jamming3. It all started from the observation that the upregulation of RAB5A, a master regulator of endocytosis, is alone sufficient to reactivate collective motility in quiescent epithelia. At this point the reader should watch the truly amazing videos accompanying the publication. But how to link a boost in endocytosis to the reactivation of multicellular dynamics?

Overexpression of RAB5A has no impact on the motility of isolated MCF-10A cells. RAB5A-mediated un-jamming is therefore a typical emerging trait of epithelial collectives. On the other hand, the upregulation of endomembrane trafficking in an epithelial monolayer increases the intensity of traction forces transmitted to the substrate and the related junctional tensions. This translates into more motile cells, which in a crowded environment can rapidly align membrane protrusions and propelling forces to generate actual movements. In these flowing monolayers, cell-generated forces are efficiently converted into collective motion over large areas whereas in the jammed counterpart, cells are stuck in a thug of war which allows for little movement despite the applied force.

With the support of physical modelling, this entire new set of information could be implemented to an in silico representation setting the minimal parameters required to describe the observed phase transitions in epithelial dynamics. Cell density and shape, together with the efficiency to align force and motion, provide a predictive environment that captures un-jamming as well as other multicellular phase transitions altogether forming a typical phase diagram for an active material. This work provides evidence that endocytosis can drive one of such phase changes by perturbing critical parameters and thus impinging in the dynamic control of multicellular motility.

Altogether this paper introduces several conceptual and methodological innovations, beyond the definition of a novel biological role for RAB5A and endocytosis. From now on we shall consider epithelial monolayers as active materials which are to be studied with a combination of methods from engineering, physics, biology and medicine. 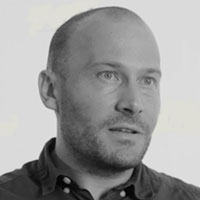