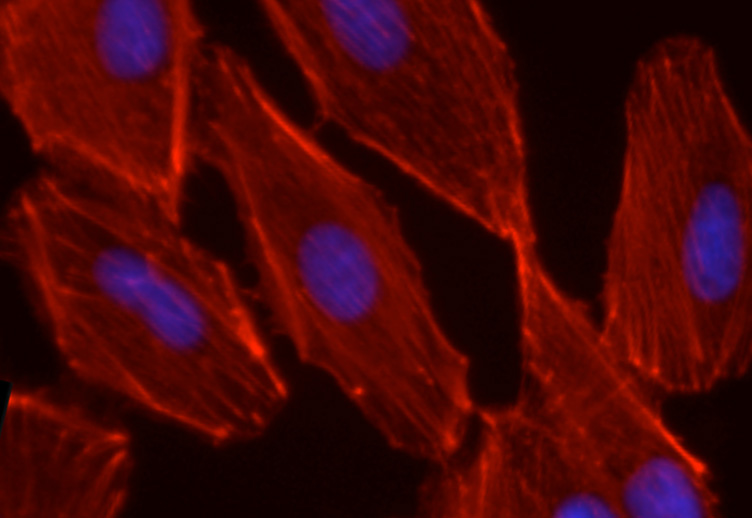 PREP1: a TALE of transcription factors,
EMT and metastasis

Epithelial Mesenchymal Transition (EMT) is a reversible process that triggers the loss of epithelial cell features, such as apico-basal polarity and intercellular adhesions, along with the gain of mesenchymal characteristics, including cytoskeletal rearrangements, individual migratory ability and invasiveness. In addition to its roles in embryo development and organ formation, EMT is involved in pathological conditions, such as wound healing, tissue fibrosis and cancer.

Transcription factor PREP1 induces EMT and metastasis by controlling the TGF-β-SMAD3 pathway in non-small cell lung adenocarcinoma.
Pre-B-cell leukemia homeobox (Pbx)-regulating protein-1 (Prep1) is a ubiquitous homeoprotein involved in early development, genomic stability, insulin sensitivity, and hematopoiesis. Previously we have shown that Prep1 is a haploinsufficient tumor suppressor that inhibits neoplastic transformation by competing with myeloid ecotropic integration site 1 for binding to the common heterodimeric partner Pbx1. Epithelial-mesenchymal transition (EMT) is controlled by complex networks of proinvasive transcription factors responsive to paracrine factors such as TGF-β. Here we show that, in addition to inhibiting primary tumor growth, PREP1 is a novel EMT inducer and prometastatic transcription factor. In human non-small cell lung cancer (NSCLC) cells, PREP1 overexpression is sufficient to trigger EMT, whereas PREP1 down-regulation inhibits the induction of EMT in response to TGF-β. PREP1 modulates the cellular sensitivity to TGF-β by inducing the small mothers against decapentaplegic homolog 3 (SMAD3) nuclear translocation through mechanisms dependent, at least in part, on PREP1-mediated transactivation of a regulatory element in the SMAD3 first intron. Along with the stabilization and accumulation of PBX1, PREP1 induces the expression of multiple activator protein 1 components including the proinvasive Fos-related antigen 1 (FRA-1) oncoprotein. Both FRA-1 and PBX1 are required for the mesenchymal changes triggered by PREP1 in lung tumor cells. Finally, we show that the PREP1-induced mesenchymal transformation correlates with significantly increased lung colonization by cells overexpressing PREP1. Accordingly, we have detected PREP1 accumulation in a large number of human brain metastases of various solid tumors, including NSCLC. These findings point to a novel role of the PREP1 homeoprotein in the control of the TGF-β pathway, EMT, and metastasis in NSCLC.
[PMID 25157139]

In response to ectopically re-expressed EMT-TFs, EMT is involved in the key steps of metastatic colonization. TGF-beta, secreted by both autocrine and paracrine mechanisms often mediated by cancer-stromal cell interactions at the invasive front of tumors, is one of the major inducers of tumor-associated EMT.

My group is currently studying the EMT controlled by the AP-1 complex and specifically the FOS-family component FRA-1, recently implicated in mestastasis mechanisms. My interest for the AP-1 oncoproteins began long time ago, when I was a post-doctoral fellow in Francesco Blasi's laboratory, while studying the transcription factors controlling the human urokinase gene (PLAU) in response to oncogenic signals. In the meanwhile, starting from the identification of the nuclear factors cooperating with AP-1 in the control of the PLAU enhancer, Francesco Blasi has undertaken a highly successful all-round study of PREP1, a TALE family transcription factor.

The TALE (Three Aminoacids Length Extension) homeodomain subfamily includes 4 Pbx, 3 Meis and 2 Prep/Pknox genes. Blasi and collaborators have investigated all major biological roles of PREP1 in mouse models and in vitro cell systems. In addition to studying various aspects of PREP1 in mouse development, Francesco Blasi has recently characterized PREP1 as a haploinsufficient tumor suppressor involved in both hematopoietic and solid tumorigenesis. In addition to delucidating the PREP1 role in maintainance of genome stability, Francesco Blasi, in collaboration with Miguel Torres (CNIC, Madrid), has delucidated the mechanisms of target site selection by the dimeric TALE homeoprotein complexes, by genome-wide analyses of the PREP1/PBX1/MEIS1 DNA-binding profiles. Importantly, Blasi and coworkers have recently shown how PREP1 oncosuppressor activity results from the PREP1 competition with the MEIS1 for PBX1 binding, affecting the MEIS1 stability and tumorigenic activity.

By identifying the PREP1 transcript as a target of miR-19a, belonging to the miR-17-92 oncomir cluster, my group had previously stumbled upon PREP1. To understand the significance of the the miR-19-mediated regulation of PREP1, we analyzed the effects of PREP1 in NSCLC cell lines. When my PhD student Maurizio Risolino, observed striking morphological changes in PREP1-overexpressing cells, I had a great occasion to start a new collaboration with Francesco Blasi, many years after the PLAU enhancer story. Francesco enthusiastically agreed with our incursion into his preferred gene product, and hosted my PhD student Nadia Mandia for a short but fruitful stay in his laboratory at IFOM.

By investigating various EMT markers along with cell motility and invasion, Risolino, et al. showed that the observed modifications reflected the mesenchymal transition triggered by PREP1. Mechanistic analysis revealed that PREP1 positively controls the TGF-beta-SMAD pathway, with an effect at least partially mediated by PREP1-mediated transactivation of SMAD3. PREP1, in addition causes the accumulation of its heteromeric partner PBX1 and of the FRA-1 oncoprotein, both required for the PREP1-induced mesenchymal transition.

Lung colonization assays revealed that PREP1-overexpressing cells, but not the poorly invasive control (A549) cells, gave rise to lung nodules. Accordingly, in collaboration with Michel Mittelbronn (Frankfurt Medical School), PREP1 accumulation was detected in a large number of human brain metastases of solid tumors, including NSCLC. These findings seem to contradict the previously reported tumor suppressor role of PREP1. Such discrepancy, however, is only apparent, since, differing from lung nodules, the PREP1-overexpressing xenografts exhibited decreased growth. Thus, PREP1 seems to play a dual function that might reflect the dual role (antiproliferative vs pro-metastatic) of the TGF-beta pathway in tumorigenesis. While a previous report from Michael Cleary's group, based on the analysis of Pbx1 knockout mice, had suggested the possible role of Pbx1 in the responses to TGF-beta, Risolino et al. provided the first evidence on the involvement of human PREP1 in EMT and metastasis, by TGF-beta-SMAD-dependent mechanisms.

Therefore, thanks to the open mind and generosity of Francesco Blasi, our fruitful collaboration resulted in the identification of a novel player in the complex network of transcription factors implicated in EMT. 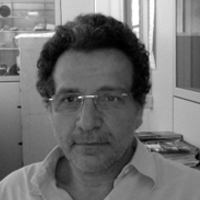 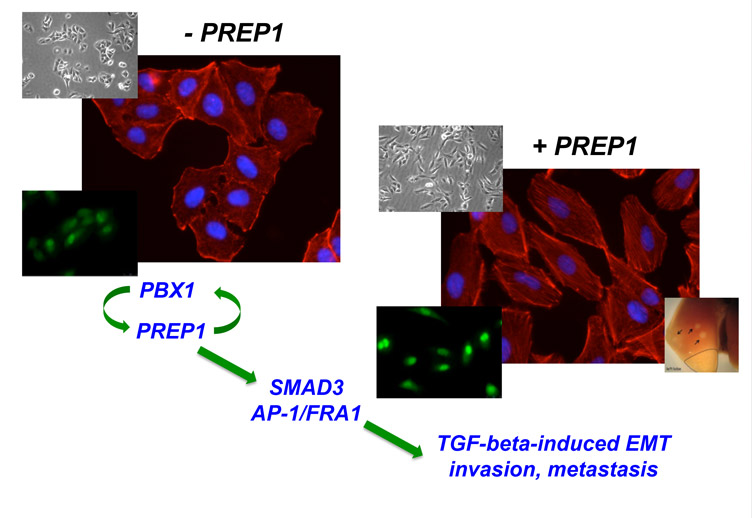 Phase-contrast and phalloidin staining show the the mesenchymal changes exhibited by PREP1 overexpressing vs parental A549 cells. Green fluorescence shows the nuclear accumulation of SMAD3. Arrows in the bottom-right image indicate the nodules formed by A549PREP1 cells in nude mice.