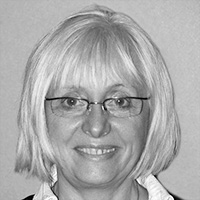 Penny Jeggo undertook her PhD in Dr. Robin Holliday's laboratory at the National Institute of Medical Research (NIMR), London and post doctoral fellowships with John Cairns at the Imperial Cancer Research Fund and Miroslav Radman at the Universite Libre de Bruxelles. These early studies exploited model organisms to study the DNA damage response. In 1980, Penny returned to NIMR to identify genes conferring radiosensitivity in mammalian cells. In 1989, Penny moved to the Cell Mutation Unit at Sussex University and in 2001 became a founding member of the Genome Damage and Stability Centre with the School of Life Sciences, University of Sussex.

Penny isolated radiosensitive rodent cell lines that proved to be defective in DNA double strand break repair. These studies led to the identification of genes required for DNA non-homologous end-joining (NHEJ) and mechanistic insight into the process. Subsequently, she identified patients defective in NHEJ, revealing the link to microcephaly.

Penny has contributed to committees and workparties considering radiation effects, particularly those of relevance to radiation protection. She has been chair of UK's Association for Radiation Research and is currently secretary-treasurer of the International Association for Radiation Research. Penny received the Bacq and Alexander Award from the ERRS in 2011, the Silvanus Thompson Award from the BIR in 2013 and Genome Damage and Stability Network Award in 2013. She was elected a fellow of the Academy of Medical Sciences in 2012.

A commentary on Travis Stracker's paper published in Nature Communications.